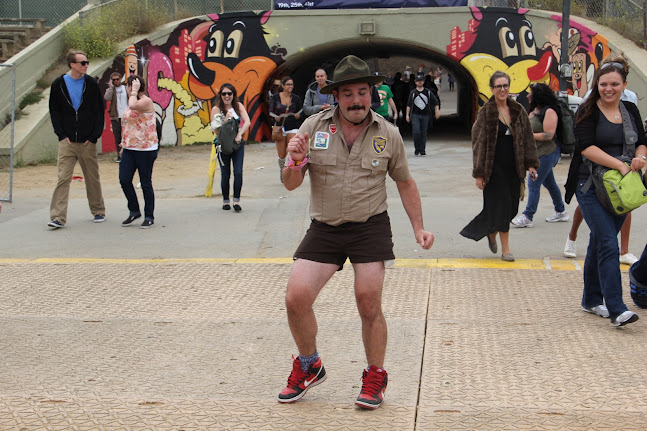 San Francisco is only 7 miles by 7 miles, so I have no idea how it can be warm and sunny only two miles away from the festival venue, but by the time you get to Golden Gate Park it looks like the opening to a Scooby Doo cartoon. Nevertheless, a great lineup today with bands like Geographer, Father John Misty, Portugal. The Man, The Kills, Norah Jones, Passion Pit, and a relaxing, cool down set by the city’s own, Metallica.

2:45 pm – Awesome interview with Jukebox The Ghost‘s Tommy Siegel in the Artist Hospitality Area. Through an error in logistics, my press pass didn’t allow me to cut through the VIP main stage viewing area at the bottom right side of the stage, to then walk up the hill to the elevated safety of the artist hospitality area (the shortcut would’ve taken about four steps). Instead, I walked around to the other side of the main stage, up that hill to the equally elevated and equally guarded press tent (which I had access to), through the gates leading to the backstage of the main stage (which I also had access to), around the back of the stage, through the massively awesome artists’ catering tent, a brief stop (I got lost) in Metallica’s very own insanely lavish VIP tent, where the tattooed bartendress looked like she could easily kick my ass in under 5 seconds, and finally, to the safe haven of the artist hospitality compound, which, outside of that ten foot strip of VIP viewing of the corner of the main stage below, I also had access (Why stop using parentheses now?).

4:10 pm – Alabama Shakes, playing on the stage next to the main stage, drew in a headliner’s crowd and wow can they wail. Sticky, Southern, molasses blues rock that coats your throat as it goes down and won’t leave you hungry for hours. 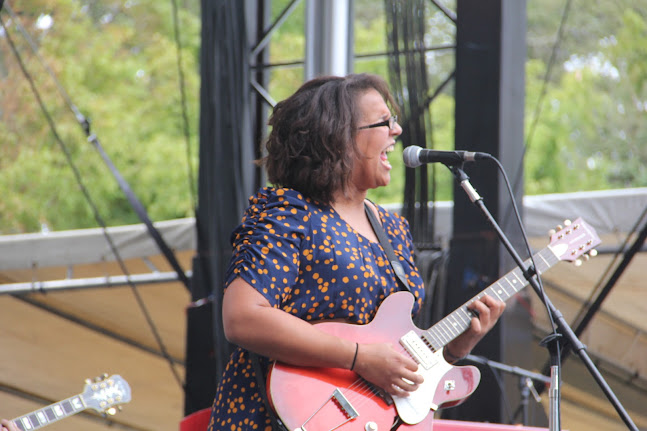 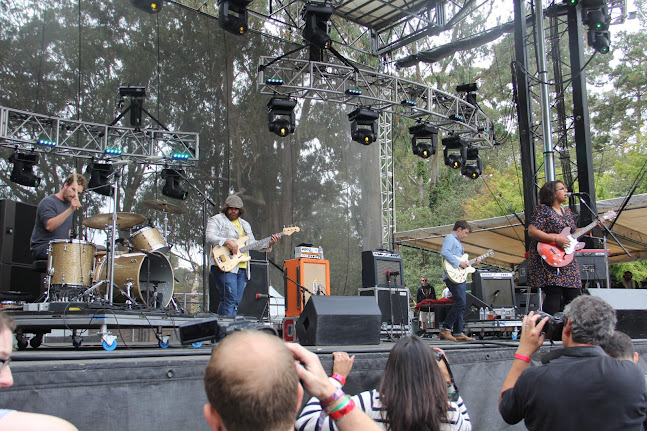 5:10 pm – Would not be surprised if this led to a gingerbread house with a kid-sized oven. 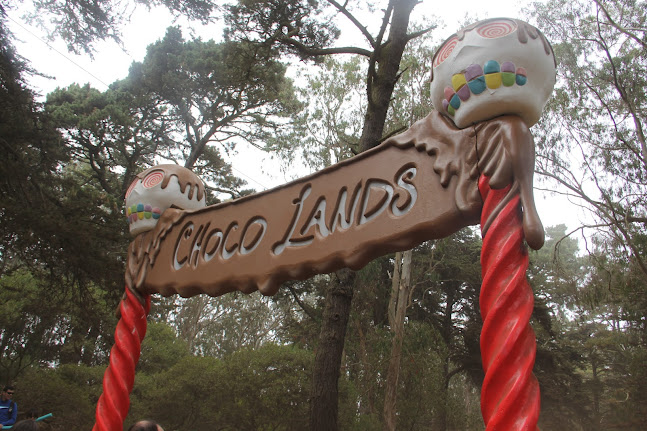 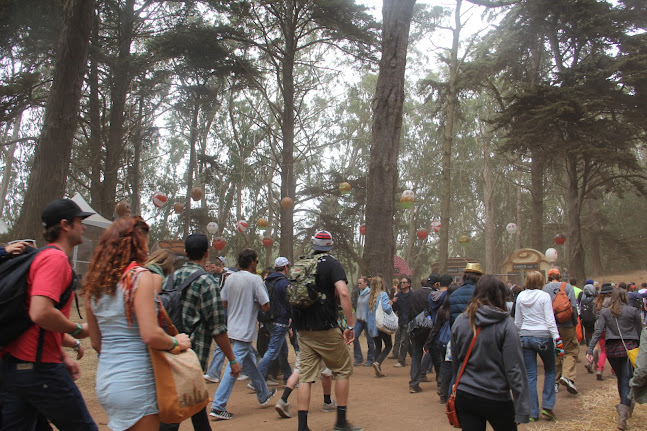 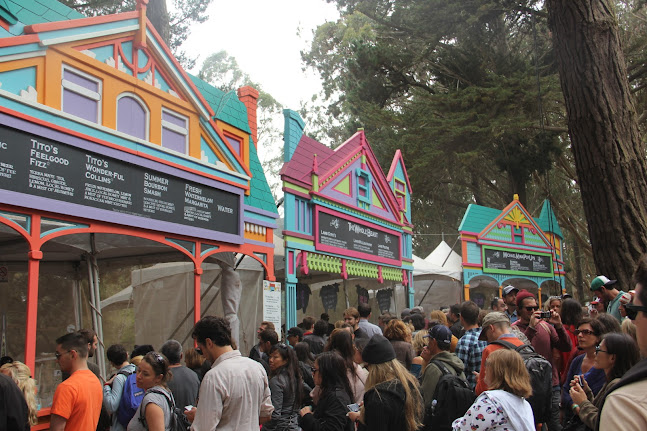 6:10 pm – The Kills‘ Alison Mosshart is Axl Rose with bigger balls. Her stage swagger is unmistakable, mesmerizing, and 100 percent badass. 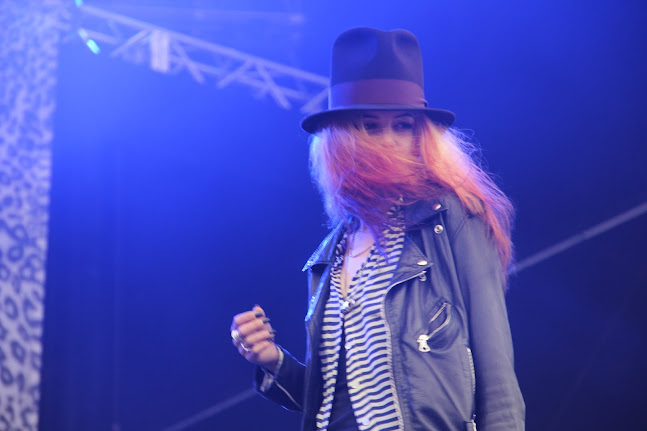 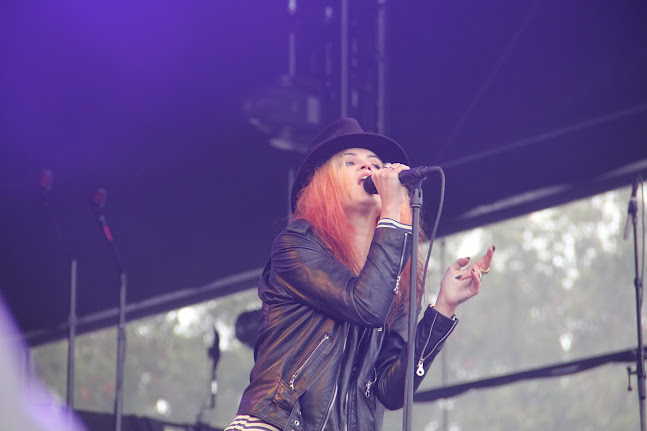 With Jamie Hince rocking dark, epic, sounds on the guitar and flanked by drummers dressed as The Foot Clan from Teenage Mutant Ninja Turtles, the band put on a primer for what makes up a rock show. 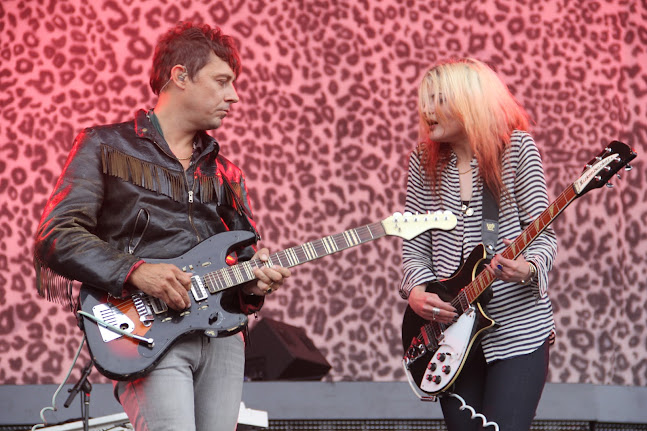 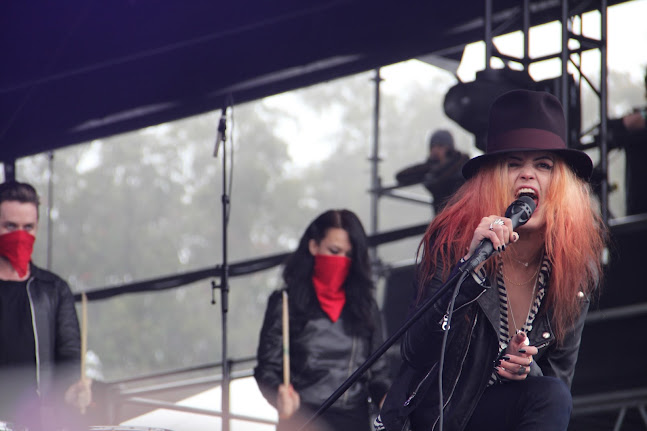 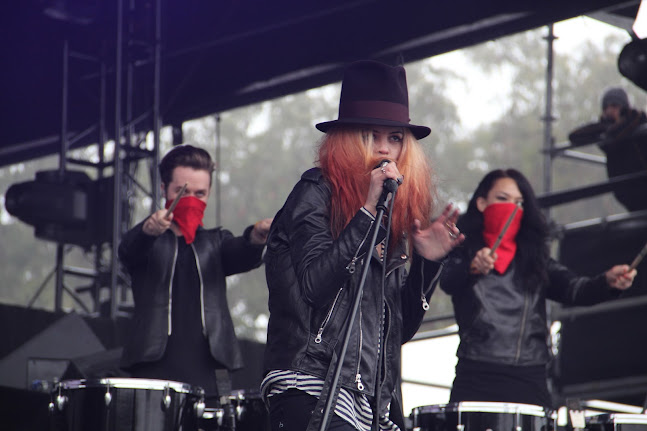 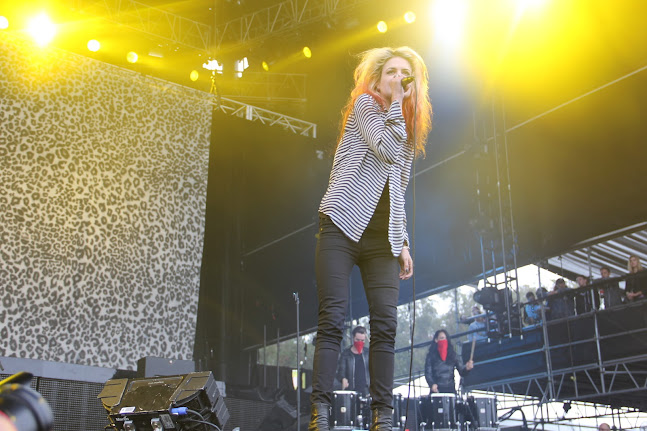 6:50 pm – Here’s the problem with Outside Lands, and in the scale of problems, it’s a good one to have. Outside Lands has gotten too big for itself. This year, they sold 5,000 more tickets per day than the previous year and outside of the main Polo Grounds stage at one end of the venue, which consists of a massive open space flanked by food vendors along the sides and hills atop which sit the press and VIP areas, the rest of the stages simply do not have nearly enough room to accommodate the crowds coming to see the bands playing on them. The breakdown in societal structure was most prevalently evidenced at Passion Pit, where despite rows of Port-O-Potty’s along the gates and even permanent park toilets, guys and dolls were peeing in the woods…..directly in the middle of the concert grounds…..not off to the side, not in the corner. If you were standing in the crowd listening to Passion Pit, there was probably a better than 50 percent chance that the person next to you was shaking off on your shoes. While bushwhacking my way to the photo pit, I stumbled upon one enterprising, unabashed (see drunk as fuck and drugged as hell) young man, swaying either to the music, with the wind, or just from his losing battle with gravity and inertia, standing next to a tree and peeing. Passion Pit was really good though. 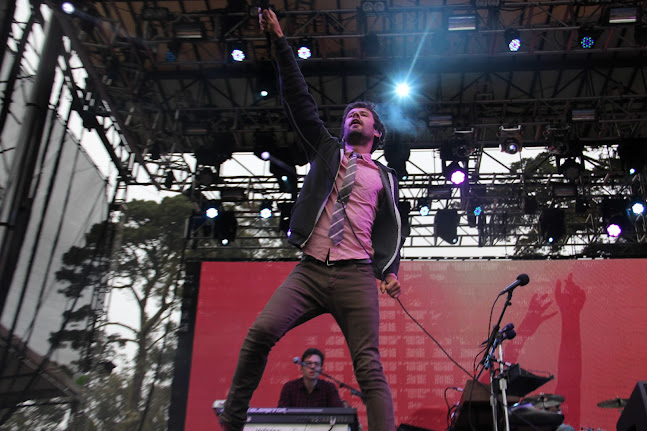 I don’t know why but Passion Pit lead singer Michael Angelakos totally reminds me of John Malkovich when he’s going for the big notes. 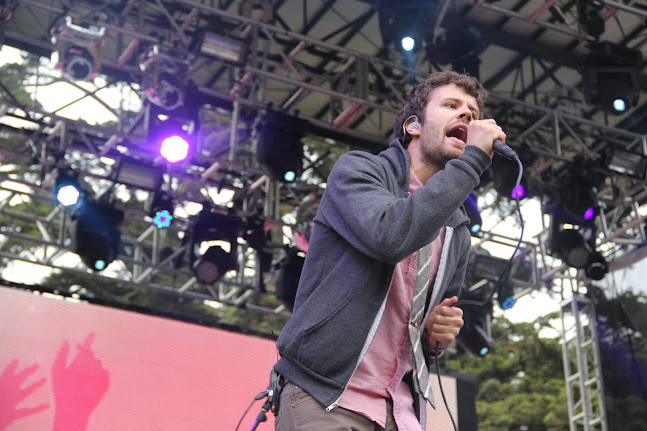 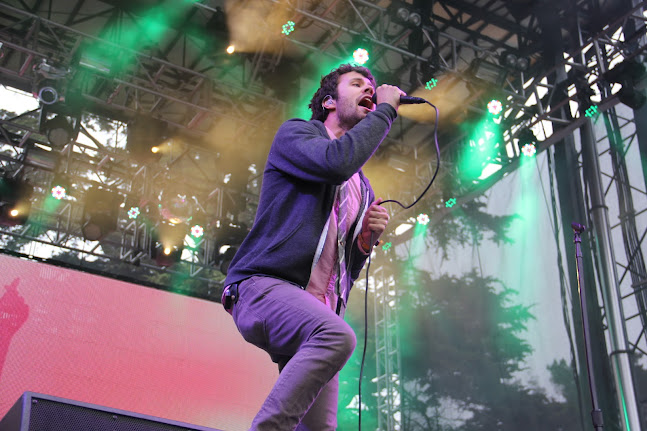 7:50 pm – Caught a little bit of Dr. Dog. Fiery, energetic southern rock. These pictures pretty much explain it all. 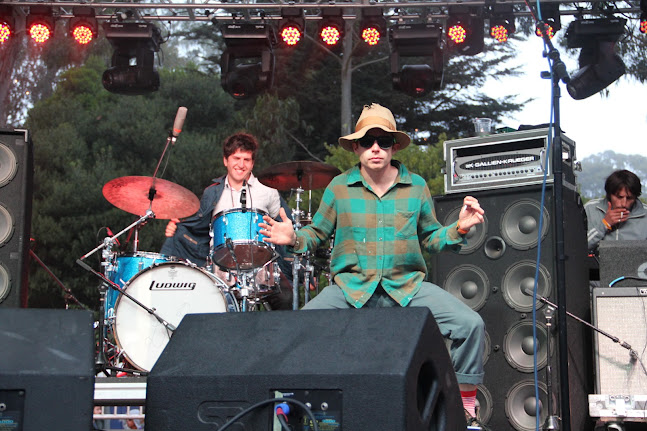 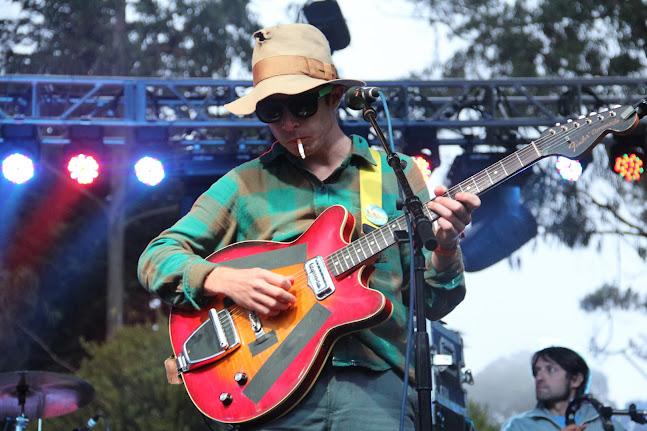 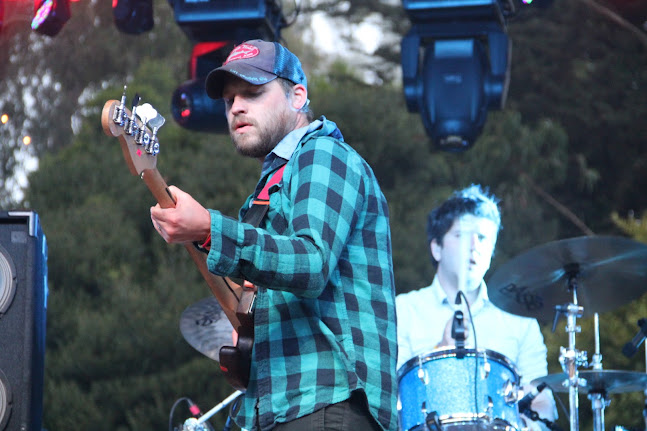 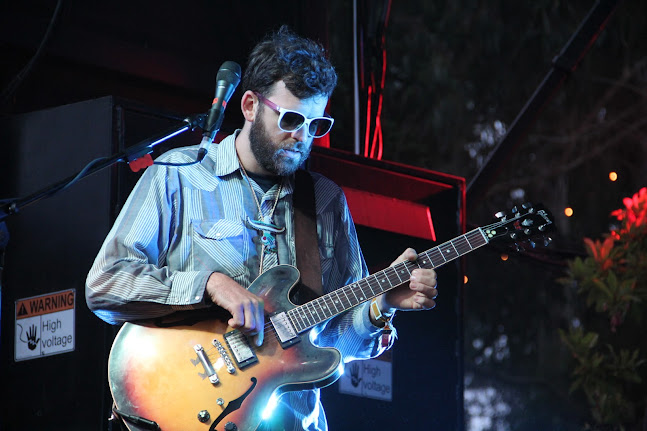 8:00 pm – If someone tells you they want to “summer with you in San Francisco” it means they are planning to drown you in an icy river.

8:10 pm – Sitting in the press tent, high above the crowded masses for a bird’s eye view of what should be a very entertaining, extremely quick battle of millennial hipsters vs. old-school heavy metal Metallica fans. It should be a bloodbath. 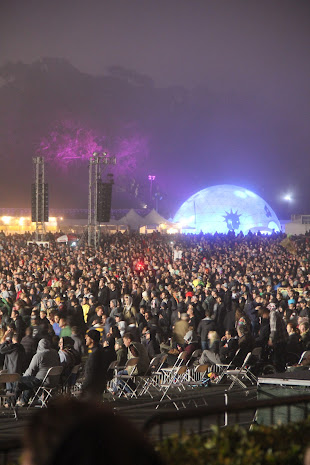 8:20 pm – To sum up Metallica’s set in one word; subdued. The flames shooting from the top of the stage during their songs were probably only 50 feet high, which I thought showed great restraint. The explosives firing all along the now-extending-about-100-feet-into-the-crowd-via -two-walkways stage only circumvented the area twice. Kirk Hammet really reigned it in with guitar solos that barely made the 10 minute mark. This was a greatest hits set that defines the term “crowd pleasing.” Metallica showed why they’re awesome by playing every song that proves it. Here’s the set list: 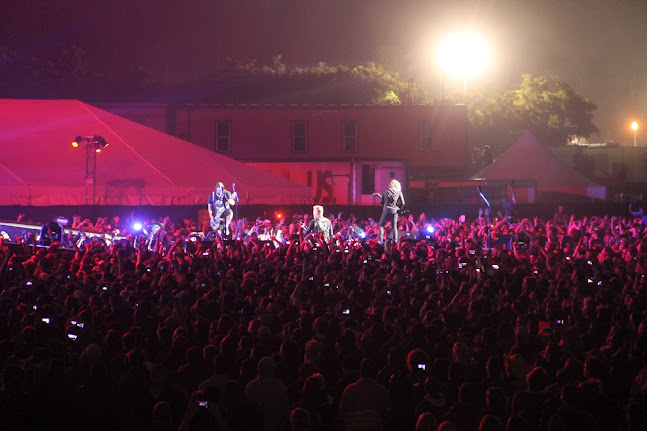 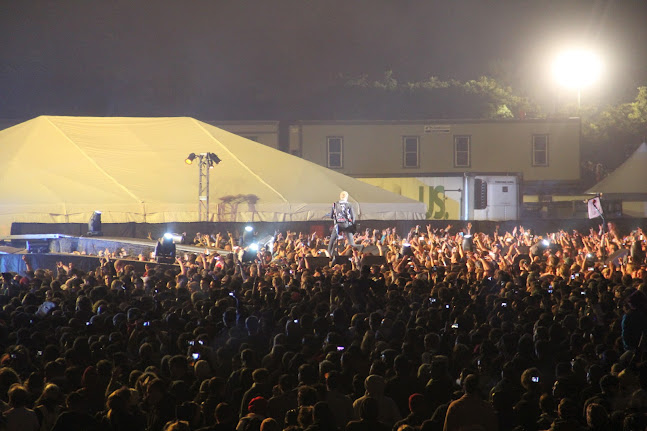 View all posts by jeeves →